I believe we all understand that what we eat can have a direct impact on how we feel. That cup of coffee in the middle of the afternoon perks us up so we can get through the rest of our day. That overly indulgent dinner may have us headed for a slump, or even a pre bedtime nap. But many times, food reactions can be much more subtle.

If we are eating foods that trigger a reaction, even if they are healthy choices by any standard measurement, that food can cause increased inflammation. In clinical practice I see varying correlated symptoms, depending upon which body system is involved. The key is identifying what a healthy diet looks like for you! There is no one perfect plan that works for everyone.

Management of these symptoms often comes back to one root cause - INFLAMMATION!

The focus of my practice has been on identifying food sensitivities and pathogenic interference so that people can be the best version of themselves. Determining ideal foods to eat is something that is in our control. Once these triggers are eliminated and folks find a new and improved vitality, it is easier to keep making choices that contribute to health now and in the future.

It's important to remember, the body wants to heal and be healthy, but if we keep feeding it things that increase stress and inflammation, it becomes a vicious cycle. A bit like mopping the floor while the toilet is still over-flowing!
As far as the different types of testing for allergies or sensitivities, they all have their pros and cons.

The typical scratch test an allergist would run tests IgE response. This is the immediate response associated with anaphylaxis. The tendency is to come back with false negatives. Where there is no immediate response you are deemed to not be allergic, when your body may react more slowly with a different immune reaction, or simply a sensitivity, where the body's response is not measurable by this method. 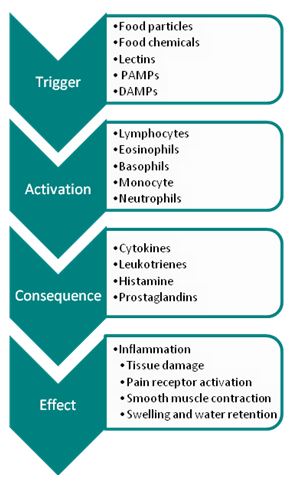 The blood tests that can be run use the slower IgG allergy response. These tests can come back with many positive results. This can be the case when there is something causing gut permeability such as a food sensitivity, pathogens, stress, medications or certain medical conditions. This permeability or “leaky gut” allows the contents of the intestines to sneak through the damaged "tight junctions" in the intestinal lining, in forms the body doesn't expect or recognize. Now in the blood stream, this food matter then gets flagged by the overwhelmed immune system as foreign, when if the gut was not damaged in this way the immune system would not be triggered by foods that are properly broken down before passing through these junctions.

With both of these tests you usually need to be eating the foods in question to invoke the true allergy response. Those who have avoided a food, because they have learned it causes symptoms, may not test as allergic if they haven't eaten the offending food in significant amounts in the weeks and months leading up to testing.

The area I focus on in my practice is the body's energetic response to the food in question using electrical impedance. Much like an EKG or EEG measures electrical impedance through the heart or the brain, BioMeridian technology measures impedance through different meridians in the body. These same energetic meridians are used in acupuncture, acupressure and Traditional Chinese Medicine.

One of the best things about this system is that we can measure the response of foods that have been eaten recently right through to foods that may never have been eaten before. The negative of this system would be little medical buy-in for this type of testing despite a significant amount of medical research, though I do receive referrals from enlightened medical practitioners who see the benefit in their patients.

I've seen more than a few clients who come in with their laundry list of 30 or 40 foods that they are reacting to or that a blood test indicates they should avoid. When we test with the BioMeridian usually we generally see between one and three foods that would appear to be a priority to strictly avoid longer term. Once there is some gut healing the other trigger foods can often be reintroduced without invoking symptoms.

There is much we don't yet understand about all the mechanisms involved in food reactions. Which is why, elimination diets are considered to be the gold standard. In this method common and suspected triggers are eliminated for a short time, usually fourteen to ninety days. Once the recommended time has elapsed, and symptoms have abated, trigger foods are systematically reintroduced and subsequent reactions are assessed. Often, with time and healing many reintroductions are successful.

All this to say; food sensitivities and pathogenic interference contribute to increased inflammation, and lowering inflammation can improve many seemingly unrelated symptoms. So, why not start taking control of your own health?

Book an appointment and let’s discover what is standing between you and your health goals!