I woke up reminiscing about deep fried apple fritters soaked in warm, fresh, local maple syrup. Growing up and raising a family in the Waterloo Region, the first Saturday in April has long been a day to look forward to the Elmira Maple Syrup Festival. With all that is going on in the world right now, that was just not an option.

I opened the cupboard to gather the ingredients for pancakes instead, and saw tigernut flour. If you don’t know tigernut flour, it’s lovely, a titch sweet because it’s a little root veggie, and bakes up fluffy. I’d bought it to make AIP onion rings from Flash Fiction Kitchen, and I wondered, could I use a similar, sweeter version of batter to make a coating for apples?

The answer, my friends, is a resounding yes!

I would recommend eating these right away. I popped a couple from the first batch in the oven to see how they would keep warm and the apple cooked a bit too much and was mushier than I prefer. 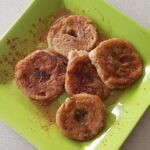